Synopsis: Stephen Hastings is a control freak.
He's arrogant. He's smart as a whip and sexy AF.
He has too much money. He's bossy, and he's usually right.
All I saw were his clear blue eyes, tight butt, and ripped torso.
I gladly handed him my V-card that night, ten years ago.
I was so stupid. I swore I'd never be that stupid again...

Emmy Barton works for a dry cleaner?
Yes, that Emmy Barton--long, blonde hair, bright blue eyes, pretty smile...
Sexy little body. Smart mough.
She was the only girl who interested me, but I was leaving to be an officer in the Navy.

Now I'm home, running my business. My life is perfectly ordered until I bump into her,
divorced and struggling to make ends meet.
I hate seeing her like this. I hate that she married Burt "The Dick" Dickerson. What an a--hole.

She says she hates me, but when we fight it's all heat and lust.
I won't leave her this way.
She will let me help her and her son. She will stay...
It's a thin line between love and hate, and this line is on fire.

(Stay is a stand-alone enemies-to-lovers, second-chance, marriage of convenience romance. No cheating. No Cliffhangers.)

Review: This is an incredible read from Tia Louise. I couldn't put it down, the story is addicting to say the least. Emmy and Stephen's story is so full of emotion it had me laughing and crying. Emmy is such a strong, independent woman. Stephen is a force to be reckoned with. Together they are the perfect couple. 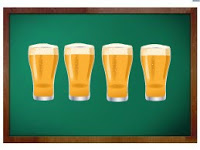 Posted by Christina Irelan at 2:55 AM 21 comments:

Called to Kill
by
A.M. Surtees


Synopsis: To the world she was simply a lady of the night but to them she was so much more. After fleeing from an abusive childhood, Tamikah found home on the streets until the day Jackson Craig gave her a purpose: To bring just to the unjust.

But when the unjust threatens her home she will have to turn every stone, rattle every cage and learn to trust an unexpected love interest in order to stop the threat before it kills her. Join the gang in Called to Kill, book one in a nail biting trilogy that will leave you lusting after a book four.

Review: Surtees does a great job drawing you in with the story in this novel. It's truly a page turner. I finished it in one sitting.The characters are great, the story is great, but the ending threw me for a look! I did not see that one coming in the slightest. 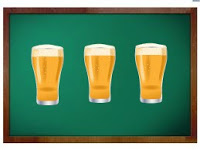 Review: The Savior by JR Ward

Synopsis: In the venerable history of the Black Dagger Brotherhood, only one male has ever been expelled—but Murhder’s insanity gave the Brothers no choice. Haunted by visions of a female he could not save, he nonetheless returns to Caldwell on a mission to right the wrong that ruined him. However, he is not prepared for what he must face in his quest for redemption.

Dr. Sarah Watkins, researcher at a biomedical firm, is struggling with the loss of her fellow scientist fiancé. When the FBI starts asking about his death, she questions what really happened and soon learns the terrible truth: Her firm is conducting inhumane experiments in secret and the man she thought she knew and loved was involved in the torture.

As Murhder and Sarah’s destinies become irrevocably entwined, desire ignites between them. But can they forge a future that spans the divide separating the two species? And as a new foe emerges in the war against the vampires, will Murhder return to his Brothers... or resume his lonely existence forevermore?

Review: Considering the fact that this is the 17th book in the series there isn't much I can tell you without spoiling parts of the book. I like to steer clear of spoilers whenever I can and I will do my best here.

This installment of the Black Dagger Brotherhood focuses on Murhder, Sarah, John Matthew, and Xhex. I have been anxiously waiting for Murhder's book since we were given a sneak peek of him in The Thief. Ward definitely did NOT disappoint with this story.

Murhder is the only Male to ever be banished from the Brotherhood. It was presumed that he was certifiable.  As the story unfolds we find that he is not as deranged as he was believed to be.

I enjoyed every page of this book. Murhder and Sarah made for a great read with some very steamy scenes.

I can't wait to get lost in The Sinner upon it's release next year. 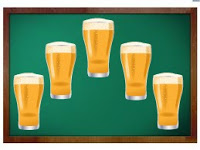 Posted by Christina Irelan at 12:25 AM No comments:

It's been a long time since I last posted. I have been in a major slump lately. Lots of things going on at home. BUT, I'm back and stronger than ever. I can't wait to start sharing my book experiences with all of you again. 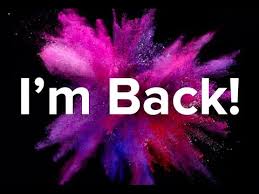 Posted by Christina Irelan at 5:09 PM No comments: 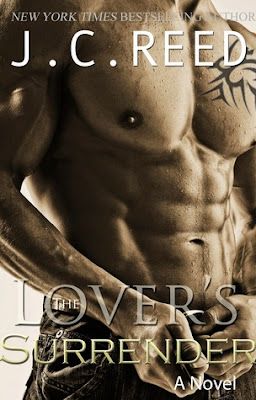 Blurb: LOVE…sometimes it’s good. Sometimes it’s bad. And sometimes it’s dangerous.
Brooke Stewart, a realtor in New York, is sure of one of thing. She should never fully trust someone who has secrets. Especially when said bad boy is the sexiest man walking on earth. She is running away and has no intention of ever returning to him. But when a friend is killed and the one man she thought she would never meet again is accused of murder, she knows the story doesn’t add up.
Dangerously sexy and arrogant millionaire Jett Mayfield knows his secrets are not doing him any favors. However, when they serve to save Brooke’s life, he has no intention of revealing them. When problems spiral out of control and his life is turned upside down, he knows he needs her more than ever. He needs her more than he knows. But will he be strong enough to do what needs to be done?
In a world where truth shatters and danger is closing in on them, where love is their only sanctuary, will they be able to find each other or is it time to let each other go? 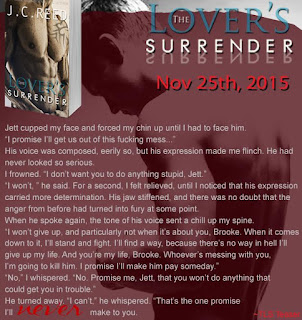 J.C. Reed is the New York Times, Wall Street Journal and USA Today bestselling author of SURRENDER YOUR LOVE and CONQUER YOUR LOVE. She writes steamy contemporary fiction with a touch of mystery. When she's not typing away on her keyboard, forgetting the world around her, she dreams of returning to the beautiful mountains of Wyoming. You can also find her chatting on Facebook with her readers or spending time with her children.
Author Links: Facebook: www.facebook.com/AuthorJCReed
Twitter: www.twitter.com/JCReedAuthor
Website: www.jcreedauthor.com Goodreads: https://www.goodreads.com/author/show/6872165.J_C_Reed Amazon: http://amzn.to/1IeBnna
Buy Links:
Amazon US: http://amzn.to/1IeBxLg Amazon UK: http://amzn.to/1lfkkfo B & N: http://bit.ly/1QFtDCK iBooks: http://apple.co/21dMyYW 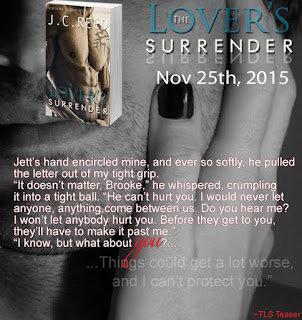